Home CORONAVIRUS MOH SAUDI ARABIA SAUDI NEWS Saudi Arabia has given more than 45.7 million doses of Corona vaccine all over the Kingdom

Saudi Arabia has given more than 45.7 million doses of Corona vaccine all over the Kingdom

Saudi Arabia has given more than 45.7 million doses of Corona vaccine all over the Kingdom

The Ministry of Health in Saudi Arabia registered 51 new corona infections, 35 new recoveries and 3 deaths in the last 24 hours, bringing up the total infections in the Kingdom to 548,474 of which 537,453 recovered with 8,788 deaths. Follow Saudi Expatriates on Whatsapp group

Active cases of Corona virus in Saudi Arabia slightly raise to 2,233 leaving 59 cases in critical care, a decrease of 5 critical cases since Yesterday. Jeddah tops in active cases with 244, Riyadh with 197, while Madina has 97 active corona cases.
- In the last 24 hours, The Ministry of Health in Saudi Arabia performed 45,594 corona tests, so far 30.23 million (30,233,942) covid-19 done by the health ministry since the beginning of the pandemic in Kingdom. Trending : Winter Wonderland with various activities launched in Riyadh as part of Riyadh Season 2021
- The Kingdom government administered over 45.7 million (45,707,658) doses of Corona vaccine to Saudi citizens, expatriates and visitors all over the Kingdom through its more than 587 vaccination centers.

- The Ministry's official statistics shows, over 24.15 million people received one dose of corona vaccine, while more than 21.38 million people received 2 doses of the vaccine and the elderly people received 1,698,656 doses of vaccine against corona virus.
- The official spokesman for the Ministry of Health, Dr. Muhammad Al-Abdali, had praised the active role of community awareness and cooperation shown by members of society of various segments and categories, and their commitment to precautionary measures, which was positively reflected in the rise in the number of vaccinated people in the Kingdom. Recommend : Is it possible to cancel work permit, Ministry of Human Resources clarifies
- Earlier, The Ministry of Health stated that switching between vaccines can help combat the variants, Because as the virus mutates, the part of the vaccine that is targeted can change, which could make the vaccine less effective. 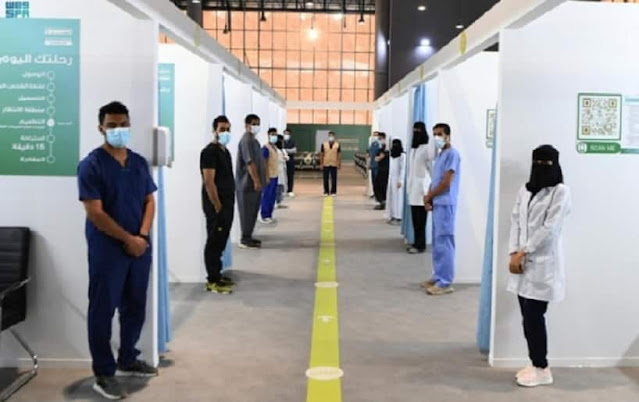