The General Entertainment Authority (GEA) in Saudi Arabia announced that children below the age of 12 will be allowed for free to enter into the "Boulevard Riyadh City" area.

This came in a tweet from the authority, through its Twitter account, in which it said, “Entry is free of charge in the Riyadh City Boulevard area for those who are under 12 years old.”
- The activities of the Riyadh Season 2021 in its second edition, started last Wednesday, under the title “Imagine More, The Boulevard squares were crowded with a big crowd, in an entertaining and imaginative atmosphere that dazzled everyone. See Also : Winter Wonderland launched with fireworks and various activities for all age group
- It included more than 1,500 performers in fancy dress, 2,760 drones, in addition to performances dedicated to the Samaritan dance, in a wonderful atmosphere, and a great turnout of visitors who lived hours of joy.

- The 2021 Riyadh season includes many selected events that are suitable for all segments of society. These offers and events will continue over a period of 4 months. They are characterized by diversity, as they include luxury restaurants and cafes, electronic games, and distinguished international stores.
- The events of the 2021 Riyadh season include recreation and relaxation tools, such as Wonderland, Riyadh Front, Combat Field, Al Murabba, Al-Athrya, Riyadh Safari, Riyadh Oasis, Riyadh Pulse, The Groves, Zaman Village, Khalluha, and the Peace Tree. See Also : Oxygen on Moon's surface is enough for 8 billion people for 100,000 years
Dinosaur World event :
- Earlier this week, Dinosaur World event launched targeting families and individuals, in the studio area, one of the areas of the Boulevard, Riyadh City.

- The idea of the event is to allow visitors to experience time travel accompanied by experts, to learn about life among dinosaurs, an experience that lasts 70 minutes, like going on the greatest safari trips, and entry tickets can be booked via the link click here.
- With the help of pioneering technology provided by the 'Dinosaur World' event, visitors will travel virtually on a group of trips aboard the event’s time machine, which can accommodate up to 38 people, and each trip is about 12 minutes long, in an experience that simulates meeting live dinosaurs and wandering through the Stone Age plains. Read : A warning from Riyadh municipality on public parking
- The visitors journey in the world of dinosaurs begins with watching the shows in the 360° theater, then allowing them to conduct scientific experiments in a special lab, touring the dinosaur park and learning about the life stages of the dinosaur.

- The event introduces its guests to the world of dinosaurs in English in two periods, the first starting at 5 pm, and the second from 8 pm, and shopping is available in the souvenir shop located there.
- The Boulevard Riyadh City is the most important entertainment destination and the largest area for the events of the Riyadh season 2021. The area includes several entertainment venues, shopping stores, game centers, cinemas, restaurants and cafes, in addition to indoor and outdoor sessions suitable for families and individuals, surrounded by theater performances and a musical atmosphere that matches the taste of visitors. Follow Saudi Expatriates on imo 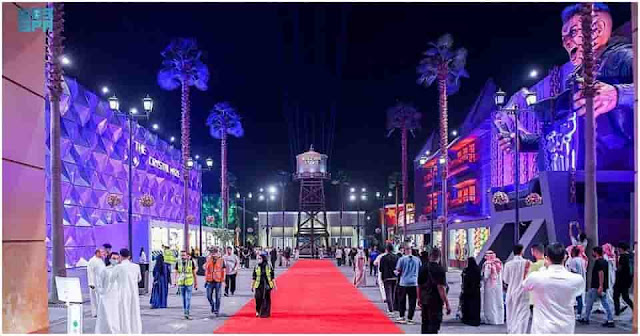