The Ministry of Health in Saudi Arabia reported 43 new corona infections, 75 new recoveries and 1 death in the past 24 hours, raising the total corona cases in Kingdom to 548,973 of which 537,933 recovered with 8,805 deaths.

Active cases of Covid-19 in Saudi Arabia drops to 2,235 of which 50 cases are critical care. Jeddah tops with 270 active cases in the Kingdom, Riyadh with 187, while Madina has 104 active corona infections.
- The Ministry of Health has so far provided more than 46.34 million (46,348,986) doses of Corona vaccine all over the Kingdom to Saudi nationals, resident expatriates and visitors for free all over the Kingdom through its 587 vaccination centers. Trending : No quarantine for fully vaccinated expats traveling from India to Bahrain
- According to the Ministry's statistics, over 24.28 million people received one dose, while more than 21.72 million people received 2 doses, elderly people received 1.7 million doses and 278,027 booster doses administered so far in the Kingdom.

- The Ministry of Health confirmed the importance of receiving the booster dose of the vaccine for those who have passed its second dose 6 months ago, in order to prevent the virus.
- The health minister of the Kingdom, Fahd Al-Jalajel announced that the Kingdom had reached 70% of immunization with 2 doses of the Corona vaccine, highlighting the importance of everyone’s commitment to the appropriate precautionary measures at this stage and not to be careless in their application. Recommend : 5 advices on booster dose of Corona vaccine from health ministry
- While the Assistant Undersecretary of the Ministry of Health for Preventive Health, Dr. Abdullah bin Mufreh Asiri, revealed that the Kingdom will launch a huge program to immunize girls between 9 and 13 years with the vaccine. 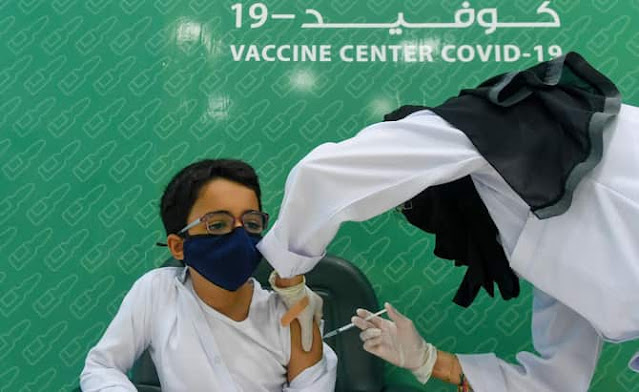